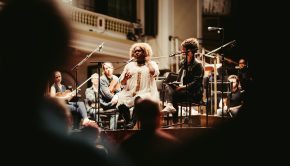 Oxford Contemporary Music has put together a short video of Errollyn Wallen’s New Music Biennial piece, ‘Mighty River’, after it […]