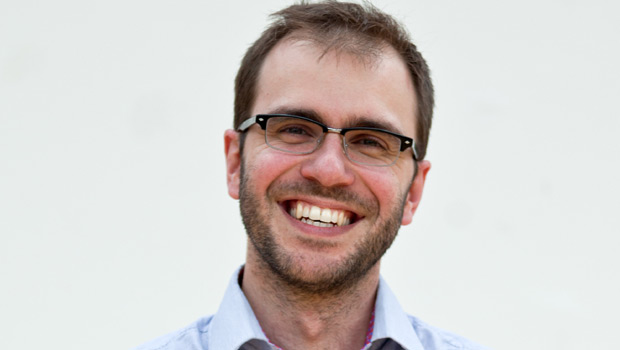 I took this picture at the opening of the 2013 Edinburgh International Science Festival at the City Arts Centre – little did I know then that I would be back in the same building just a few months later, talking with the Edinburgh Art Festival about a new commission for 2014.

Putting aside the strict accuracy of the statement (whales and dolphins would disagree with the “air” part…), it’s certainly an interesting idea that is often overlooked. Sound is movement – the movement of the very molecules that surround us. These molecules bump into each other, moving back and forth – some reach our ears, and others touch our skin. We are constantly being caressed, prodded, and assaulted by sound. We are in it, a part of it, and totally inseparable from it. There is some evidence to show that sound and touch are neurologically similar, and it’s pretty fascinating to think about all of the little sounds that are literally touching us at any one time.

It’s also interesting to square this definition of sound with the concept of music, and being a musician. A musician’s role is all about moving air – creating patterns in the movement of molecules, which are interpreted by an audience and imbued with structure and meaning. So while the dolphins disagree with the “air” part of this definition of sound, musicians disagree with the qualifying “…nothing more than…” which seems to imply that sound, because it is comprised of tiny shaking movements, can not be meaningful or important.

Perhaps it is the microscopic, invisible nature of sound that makes music such an abstract artform. We have no direct human connection to it. We are unable to see or directly analyse it, we can only experience it; letting the shaking air molecules reach our ears and vibrate against our tympanic membranes, setting an incredibly complex series of movements in motion that result in our brains interpreting a sound.

For this project I wanted to explore this notion of sound as moving air, and that led me to think about wind. The sound of wind is, of course, hugely evocative and powerful…and notoriously difficult to record. But the musical element of my piece won’t be built from recordings of wind, but from the creation of wind itself, through the use of electric and mechanical fans.

The piece ties in with cultural themes of the Commonwealth, central to the 2014 Edinburgh Art Festival. Fans are a fascinating symbol of global socio-cultural exchange. Ceiling fans called punkah have been used in South Asia for several thousand years, along with other devices used before colonisation of the nations that were to become the Commonwealth.

This project, Currents, will be both an installation and a performance. Both will use custom-built and hacked mass-produced fans to create wind and sound. The installation will use weather data from around the world to recreate the wind speeds occurring in other countries, in Edinburgh, in real time.

The performance element involves a small ensemble playing the fans as instruments, controlling the movement of air in various ways. I want both the performers and the audience to connect with the molecules that are touching their skin, quivering and shaking in place. Musical performance offers a powerful way to make these connections.  Moving air is, after all, what musicians do.