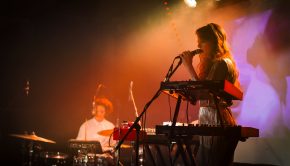 Tickets are on sale now for the showcase performance of ‘Songs of Flight’, as part of PRS Foundation’s hugely successful New Music […]