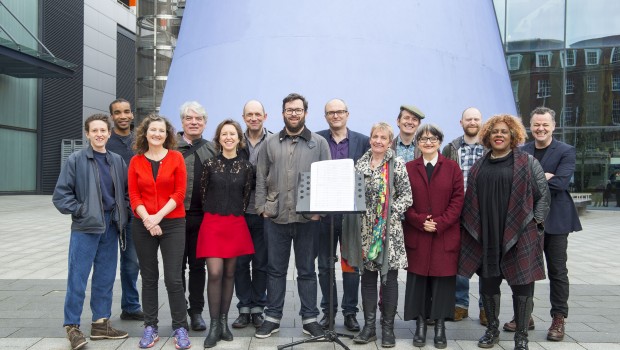 Yesterday we hosted the first day of our first Composer Gathering in Hull ahead of the New Music Biennial 2017, which is presented in partnership with Hull UK City of Culture 2017, London’s Southbank Centre and BBC Radio 3.

The Composer Gathering, which is supported by Jerwood Charitable Foundation as part of New Music Biennial, brings together composers, representatives from commissioning organisations and supporting partners involved in the New Music Biennial 2017 for two days of discussions and workshops. This event gives the composers the opportunity to further explore ideas and challenges relating to their commissions, to network with fellow artists and other commissioning organisations and to familiarise themselves with the city of Hull and potential performance spaces.

Today the composers are hitting the streets of Hull to see more of the city and locations that will be involved during the New Music Biennial.

Many of the commissions resonate with one of the themes of Hull UK City of Culture: Made in Hull, Roots and Routes, Freedom, Tell the World. Errollyn Wallen’s Mighty River orchestral work explores the themes of slavery and freedom by drawing inspiration from the work of English politician and Hull native William Wilberforce who lead the movement to abolish the slave trade. Influenced by the natural landscape surrounding his Yorkshire Hometown, Daniel Elms’ piece for acoustic and electronic instruments celebrates the maritime history of Hull using re-imagined sea shanties and maritime hymns. Fellow Yorkshire composer Gavin Bryars uses the inspiration of the Holderness/Spurn Head landscape alongside the life and poetry of Andrew Marvell to form the basis of his new work.

Full details of the twenty commissions chosen for the New Music Biennial 2017 can be found here.