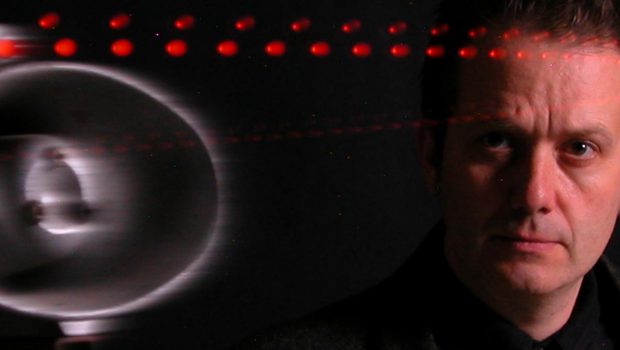 Ring Out… Eight giant towers supporting suspended and swinging loudspeakers…. A monumental work which involves a monumental amount of work…..

We’ve been working on Ring Out for over a year now. The piece is being developed and constructed at the wonderful 101 Outdoor Arts Creation Space up on the old Greenham Common Airbase. Working with artist and maker Martin West I developed initial sketches and designs for what I imagined the Ring Out towers might look like and then Martin has been painstakingly working on developing the prototype towers. The design for the speaker housing took me to Didcot Metal Services where Mike and Chad have made up the first prototype aluminium speaker cone.

One of the problems I have when working on a piece like this is that it’s hard to actually compose a piece for a set of machines that don’t exist yet. I have had a sense of what I think the completed work might sound like but until the first tower was made it was very difficult to be completely sure that the idea would work. The sounds will be electronic tones that I create on the computer which are then amplified and replayed through a speaker system built into the aluminium cones.

My initial idea was that the sounds would be bell-like to mirror the obvious bell and bell ringing connotations of the structures. However, once I heard the test sounds that I replayed through the prototype I was unsure. Maybe it is too obvious and makes too simplistic a relationship? One of the effects of physically moving sound through space is that the movement, and the speed of movement, gives a slight Doppler effect to the sound with a subtle rising and falling of the pitch as the sound travels towards you or away from you. This is more apparent with a continuous tone rather than a more complex bell sound or a percussive bell striking attack.

The other realisation that I had once the prototype started to swing was the physical presence of the swinging cone. It is a highly dynamic experience and this is intensified by having a performer moving in close proximity to the swinging of the arm. When I say a performer, I mean me, as there is an element of danger involved that would be hard to ask anyone else to do. So, seeing and experiencing the piece in action has made me rethink the performative element of this work and I am thinking about how to meaningfully incorporate my movement between the towers into the structure of the composition. My idea as I write is to use tone generators for each tower so that I can actually tune the notes to specific frequencies during the performance. But that’s what I’m thinking now, as for tomorrow…?

Find out where and when you can experience Ring Out and the other New Music Biennial pieces here.